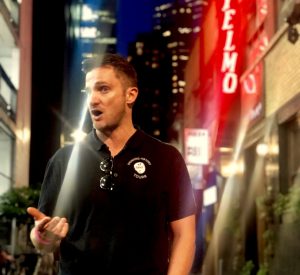 Melbourne’s bar scene has a long and colourful history, and Ben Oliver has devoted his life to unearthing all the good bits.

As the founder of Drinking History Tours, Ben leads small groups into Melbourne’s famous back alleys to reveal some of our best bars, with a bit of history along the way. There’s something for tourists and locals.

With almost 15,000 licensed venues in our fair city, Ben struggled to choose his favourite hidden bars, but these are five of his go-to venues.

Robot Bar
12 Bligh Pl, Melbourne, (03) 9620 3646
Laneway bars west of Elizabeth Street are harder to find, which makes Robot Bar such an unexpected gem. This bar takes its cues from Tokyo, and its name from the robot mobiles suspended from the ceiling. Your Japanese culture cup overfloweth with a dizzying array of beers, snacks and of course, sake. And if you’re left wanting, Robot also hosts anime flicks every Tuesday night.

New Gold Mountain
21 Liverpool St, Melbourne, (03) 9650 8859
New Gold Mountain is one of the city’s preferred post-shift haunts for the hospitality industry, and with good reason.